Italians at the Restaurant: An Extract from Beppe Severgnini, “An Italian in Italy”

An Italian in Italy (BUR publisher, 2006) is an extremely excellent book from an extremely excellent GreatbrItalian journalist, essayist and columnist, Beppe Severgnini. Beppe is so extremely GreabrItalian that the Queen made him OBE, Officer of the British Empire, in 2001, and the then President of the Italian Republic, Giorgio Napolitano, made him Commendatore dell’Ordine al Merito della Repubblica in 2011. Beppe has written on Il Giornale, il Corriere della Sera, la Gazzetta dello Sport, the Sunday Times, the Economist, the Financial Times, and the International New York Times. He is also publishing extensively on the many thought-provoking ways of being Italian in Britain and in Italy, and of looking at Italians and Italy from a British point of view. His witty Italians forum with many contributors has become a fixed feature on various newspapers and magazines. Anyone reading his serious articles will hugely expand his/her knowledge of both Italy and Great Britain, and beyond; and anyone reading his inventive, ingenious, intelligent and highly entertaining writings on Greatbritaly and Greatbritalians will learn, laugh and love it! 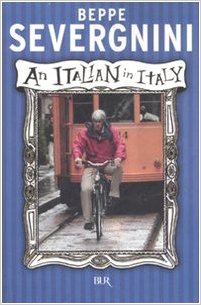 The restaurant, one way of sitting in judgement

Let’s see, now: unaffectedness, self-indulgence; habit; relief; confidence; imagination; recollections; curiosity; confidence; lashings of intuition; a pinch of tradition; family, civic, and regional pride; diffidence; conformism; intransigence; realism; ostentation; amusement; and surprising serenity. These are the emotions Italians experience as they prepare to sit at a restaurant table. You should try to experience them, instead of just ordering linguine primavera.

In short, we are consummate professionals of culinary consumption. No one else in Europe eats the way we do. … Italy still has republican vigor grafted onto tradition. For centuries, Italians have sought, and usually found, consolation at the table. We don’t think that a sauce is tasty, or that an olive oil is good. We know it is. We may lie, of course, out of politeness or calculation. Bu that, too, is a touch of artistry, if you think about it.

Note that I’m talking about all Italians, not just a hard core of gastronomes. There is a spontaneous gustatory proficiency that cuts across social classes, age groups, income brackets, education, and geographical boundaries. Confident food-related judgement derives from our unaffected approach to the table. If there are any tense faces in this restaurant, it’s only because they’re worried about the check. But I repeat, people know what to choose and what to avoid. If they choose the wrong starter, it’s because they want to be able to complain later. In its own way that, too, is a touch of sophistication.

Statistics confirm this culinary pride, which derives more from culinary awareness than from chauvinism. According to a British survey, ninety Italians out of a hundred prefer Italian cooking to other cuisines. No other digestive tracts in Europe are as patriotic. Italian cooking also seems to be the favorite among non-Italians. Some 42 percent of interviewees put la cucina italiana in first place, followed by Chinese cooking and French cuisine. Third place might not be good enough for our neighbours over the Alps, but they should take it in sporting spirit. Losing to the champions is no disgrace.

Italians have the same relationship with food that some Amazonian peoples have with the clouds in the sky – one glance and they know what to expect. Naturally, it has taken time to reach this level. … Consider the humble cappuccino. After ten o’clock in the morning, it is unethical, and possibly even unlawful, to order one. You wouldn’t have one in the afternoon unless the weather was very cold. Needless to say, sipping a cappuccino after a meal is something only non-Italians do. Pizzas at midday are for schoolkids. Rice with meat is perfect, but pasta with meat is embarrassing unless it’s cooked in the sauce. Having a starter after your pasta raises no eyebrows, but eating a main meat or fish dish instead of a starter looks greedy. Grating Parmesan over clams is an offense against religion, but if a young chef suggests it, express approval. Wine in flasks is for tourists – package tourists if the flask is hanging on the wall. Finally, there is garlic. Like elegance, garlic should be present but should not intrude. The bruschetta garlic toast served in some Italian restaurants abroad would not be actionable in Italy.

Once, an English friend called this sort of thing ‘food fascism’. I told her she was exaggerating. She had ordered a cappuccino after her evening meal, and the waiter refrained from calling the police.

It has been said that the digestive tract is a metaphysical entity in Italy, like lawns in England. This is true, but our obsession is more serious. The English don’t eat their lawns. We talk about food before we eat it, and after we’ve eaten it. Digestive discussion reassures the stomach and prepares the mind – for another meal, and another discussion.

But food is not just the measure of all things in Italy. Here, in the land of GreatbrItaly-GranbrItalia, eating is also a genetic condition. Foodlove is a chronic neuron condition. Cooking is a paleo-art, tattooed in the Greatbritalian/GranrbrItaliano brain. The Italian love for good food goes together hand in hand with the love for Italy, which is tremendously increased if and when experienced from a little afar – from a sunny tropical island where the nearest shop that sells proper pasta is 100 Km away, from an ultramodern, ultraefficient Northern country where the sky is always grey and the temperature usually varies between -5C and +5C, or, in our case, from this side of the Channel.

“It is difficult to define with precision the happy, insubstantial atmosphere that makes up Italian life, a mixture of good humour, wit, and live and let live, which does not preclude depth of thinking, audacious skepticism, a certain sensual passion that is also romantic, full of understanding for human nature and tolerance for vices and virtues”. The words are those of Giuseppe Prezzolini, a passionate, embittered Italian writer and intellectual. When he came back from New York in the 1960s, he went to live just over the Italian border, in Switzerland. His was love from a safe distance, but love it remained. (p. 208).